This bonus episode, the second one released in conjunction with Sean Munger’s upcoming novel Jake’s 88 (which is set in the 80s), examines the political, cultural and social history of the 1980s. Sean begins with two dreadful disasters in 1988 involving airliners being blown out of the sky, one over the Persian Gulf, the other over Scotland, and how both were related to the most destructive war of the 20th century, excluding the two world wars, which almost drew in the United States. Pivoting from geopolitics to pop culture, a spot-check of the most popular movies, TV shows and recording artists of 1988 takes you into a dizzying thicket of competing cultural ideas. You’ll learn why Die Hard was not originally a Christmas movie, how television’s most beautiful ingenue was punished for daring to want to have a baby while starring on a hit show, and what cartoon rabbits, airborne cocktail shakers and misheard Beach Boys lyrics have to do with each other.

Jake’s 88 is a coming-of-age romance set in the year 1988. It’s deeply steeped in the curious head space of the decade and loaded with pop culture references. It’s available for preorder here on Amazon Kindle (and a paperback version is also available). The book releases January 15, 2019.

[Above] The USS Vincennes, the U.S. Navy ship that shot Iran Air Flight 655 out of the sky over the Persian Gulf in a tragic case of what psychologists call “scenario fulfillment.” Part of the reparations paid by the United States government to Iran involved returning financial assets that were originally frozen after the beginning of the hostage crisis, 9 years earlier. George H.W. Bush, then running for President, seemed to be obliquely referencing the Flight 655 tragedy when he insisted on the campaign trail that he would “never apologize for America.”

[Above] Quid pro quo, but for what? The wreckage of Pan American Airways Flight 103 lies on a hilltop in Lockerbie, Scotland in December 1988 after being blown out of the sky with a bomb planted by Libyan terrorists. The diplomatic fallout from this incident has continued to trouble every U.S. President from Reagan to Obama; some legal proceedings relating to it are ongoing to this day. The families of those killed in the attack have remained remarkably cohesive and publicly active for the past 30 years. 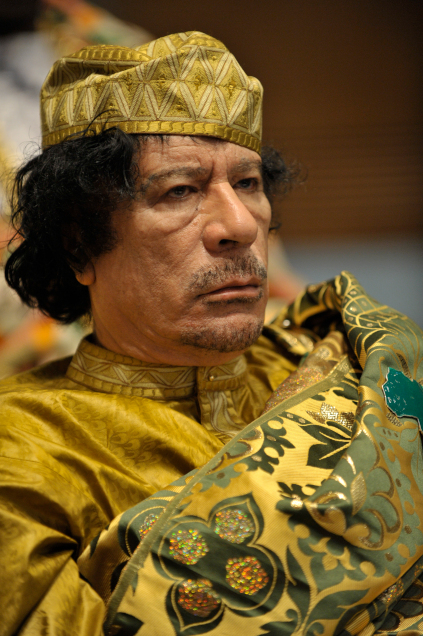 [Above] Libyan dictator Moammar Qaddafi in 2009, about two years before his death. A middling military officer who seized power in a coup in 1969 with the express intention (later abandoned) of uniting Libya with Nasser’s Egypt, Qaddafi increasingly retreated into a fantasy world that was totally cut off from reality. In the early stages of the 2011 revolution that resulted in his ouster and death, Qaddafi believed his political opponents were on drugs that had been slipped to them in cups of Nescafe. The truth about whether his daughter really died in the 1986 American air raid on Tripoli may never be known.

[Above] The USS Stark, burning and listing after being attacked by an Iraqi fighter jet on May 17, 1987. The captain of the Stark, Glenn Brindel, was recommended for a court-martial but ultimately retired early with an official reprimand. The Stark incident heavily contributed to the keyed-up thinking of the officers aboard the Vincennes a year later.

[Above] The official video for the Beach Boys’ “Kokomo”—which was the band’s first number one single in 22 years—plays out, as it was intended to, as a commercial for the Tom Cruise film Cocktail. The song is good, but the film received savage reviews; veteran critic Vincent Canby called it “utterly brainless.” Despite its critical failure, the film grossed $171 million during a summer dominated by Roger Rabbit and Bruce Willis.

[Above] A take from the soundtrack of Rain Man, composed by film composer Hans Zimmer who would later create the iconic scores for Inception, The Dark Knight, The Thin Red Line, and, possibly his best score ever, Gladiator. The film Rain Man, about an autistic savant (portrayed by Dustin Hoffman), was a rare case in which the film awarded the Academy Award for Best Picture was also the year’s top box office hit.

[Above] A scene from Angel Heart, which scandalized audiences—or at least TV executives—when Lisa Bonet played a racy sex scene against Mickey Rourke (itself an alarming circumstance). The film also featured Robert De Niro as, apparently, the Devil. Angel Heart was controversial at the time, and continues to divide audiences; some hail it as a masterpiece, while others (like me) view it as unintentionally comical.

[Above] The original video for Michael Jackson’s “Bad,” the title track from his 1987 album. Though it probably would have been remembered as a solid album under different circumstances, Bad couldn’t escape negative comparison with the out-of-control hit album Thriller from 1982. Jackson’s personal demons began to get the better of him about this time, leading ultimately to his reclusive lifestyle, obsessive plastic surgery binge and strange public behavior. He died of an overdose in 2009.

[Above] The most famous scene from Die Hard involves a spectacular stunt by Alan Rickman, then in his first film role, playing bank robber Hans Gruber. On the orders of director John McTiernan, Rickman was dropped prematurely before he was ready, accounting for the genuine look of shock on his face. Die Hard has transcended its original summer-blockbuster status to attain a cultural cachet matched by few films from its era. It is preserved in the Library of Congress as a historically important film.

All photos are believed to be in the public domain. I am not the uploader of any of the YouTube clips embedded here. The cover of Jake’s 88 is copyright © 2018 by Sean Munger, all rights reserved.