One of the most bizarre and mysterious cultures in human history, ancient Egypt still holds considerable interest for us today. This was even more true in the 1810s, not long after battles between France and Britain in the region of the Nile brought European travelers, scholars and opportunists to the desert to hunt for ancient Egyptian artifacts. One of the most notorious of these characters was Giovanni Battista Belzoni, a former barber and circus strong man who in 1815 became the go-to guy for British agents seeking to make a killing on selling Egyptian artifacts back in Europe. Belzoni’s incredible run of luck in the tomb raiding business, especially in October 1817, resulted in the discovery of numerous undiscovered and forgotten tombs in the Valley of the Kings, bringing to light their mysteries and questions that have lingered for the past 3,000 years.

In this episode of Second Decade, Dr. Sean Munger will trace the rise of Europe’s interest in Egypt, why the 1810s was such a crucial part of that story, and the discoveries on (and under) the ground that still tantalize us today. You’ll meet not only the audacious character of “The Great Belzoni,” but an ambitious and superstitious Ottoman prince, a wily British agent seeking to move as much loot as possible from the land of the pharaohs to the British Museum, and an Egyptian king who left behind over 800 wooden servants to work for him in the afterlife. Dr. Munger also has a rare occasion to share a story from his own childhood, one of his very first encounters with history.

[Above] Giovanni Battista Belzoni, the Italian-born circus performer, barber and adventurer who made several important discoveries in Egypt’s Valley of the Kings, especially in the month of October 1817. Battista had no academic training and was originally brought to Egypt to sell spurious hydraulic technology to Muhammad Ali Pasha. His interest in Egyptian tombs seems to have been primarily pecuniary, but he’s remembered as a key Egyptologist of the early 19th century, for better or for worse. 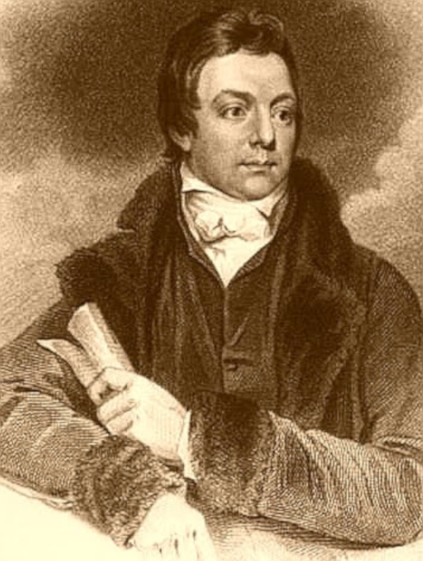 [Above] Henry Salt was the British Consul in Egypt beginning in 1815, but his previous overseas adventures included trips to India, the Cape Colony (South Africa), and Ethiopia. His intense rivalry with Italian artifact collector Bernardino Drovetti ultimately led Salt to employ people like Belzoni. Salt served in Egypt for the rest of his life, dying in Alexandria in 1827. 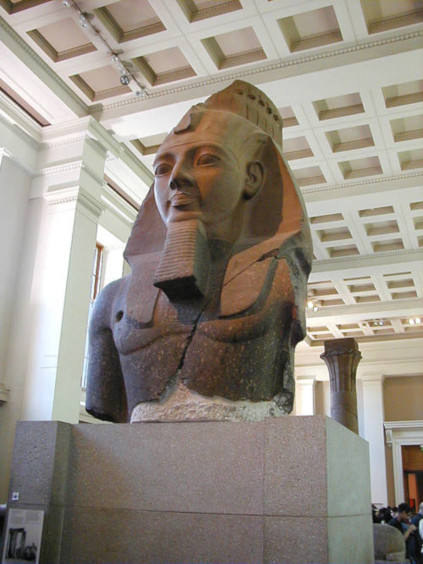 [Above] The “Younger Memnon,” the incomplete statute of Ramses II whose recovery and transportation to Europe was the first substantive task of Belzoni as an employee of Henry Salt. This granite statue was created about 1270 BCE, and was originally discovered by Napoleon’s troops but they couldn’t dig up and transport such a massive artifact. The statue is one of the prize showpieces of the British Museum, along with the Rosetta Stone. Egypt’s modern government has repeatedly tried to get it back, so far without success. 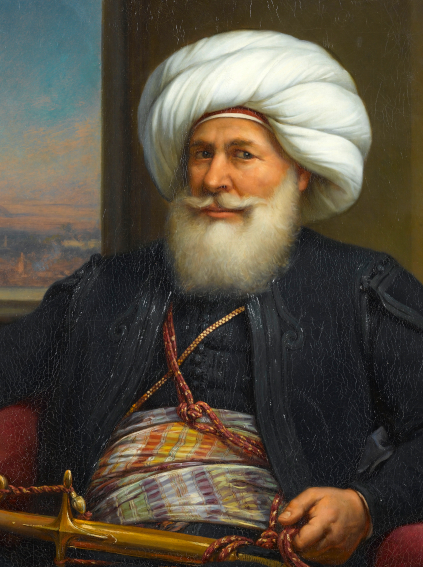 [Above] Muhammad Ali Pasha, the Ottoman viceroy and self-proclaimed Khedive of Egypt from his seizure of power in 1805 until his death in 1849. Ali skillfully sought to play European powers off one another in Egypt, hoping ultimately to use their intervention as a prelude to Egyptian independence from the Ottoman Empire. Ali also continually battled the Mamluks, the old medieval rulers of Egypt, for dominance. Not an Egyptian himself, he encouraged the looting of artifacts from Egypt to raise cash to continue his wars and political projects. 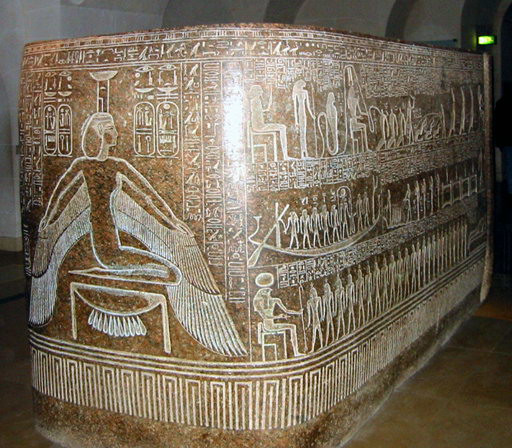 [Above] The sarcophagus of Ramses III was one of the artifacts Salt tasked Belzoni to bring to England. Its recovery in 1816 also resulted in the discovery of the sarcophagus lid, which the enterprising Belzoni counted as a unique artifact outside the scope of his contract with the British agent. Antiquities in the 1810s, like toys today, were evidently “sold separately.”

[Above] An example of an ushabti from an Egyptian tomb. These figures, commonly made of wood but sometimes glazed or even gilded, were intended as “dummies” to stand in for the dead pharaoh and perform any work required of him in the afterlife. Hundreds of these figures were typically made, so many that ancient tomb robbers sometimes didn’t even bother to steal them. There are, however, examples of situations in which ancient robbers threw ushabtis against walls to dislodge the gold foil in which they were sometimes covered. The ancient Egyptian robbers were every bit as rapacious as their European counterparts millennia later. 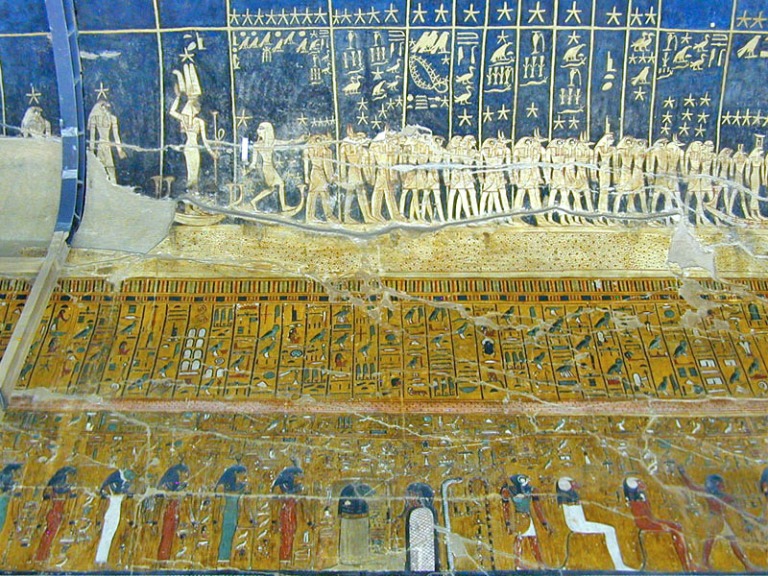 [Above] Photo by Flickr user Jean-Pierre Dalbera, used under Creative Commons 2.0 license. Here is some of the stunning relief fresco art found in the tomb of Seti I, which was Belzoni’s grandest discovery and the end of his run of luck in October 1817.

[Above] Photo by Flickr user Jean-Pierre Dalbera, used under Creative Commons 2.0 license. Another example of the artwork found in the tomb of Seti I. This is regarded as the most beautiful of all the Valley of the Kings tombs. Tutankhamen’s, by contrast, is a tiny cellar with a couple of much inferior paintings.

[Above] The face of Seti I, mummified about 1279 BCE. Seti’s remains were not found in his tomb by Belzoni in 1817, but had to wait several more decades until the mysterious Deir el-Bahari cache was discovered in 1881. In antiquity, somebody went around collecting all the mummies of Egyptian kings and nobles they could still find and stashed them in this small tomb, possibly to prevent them from being desecrated by robbers. Seti’s head was torn off apparently in this process. He is believed to have been about 39 when he died. Life even for the rich in ancient Egypt was extraordinarily hard by our modern standards. 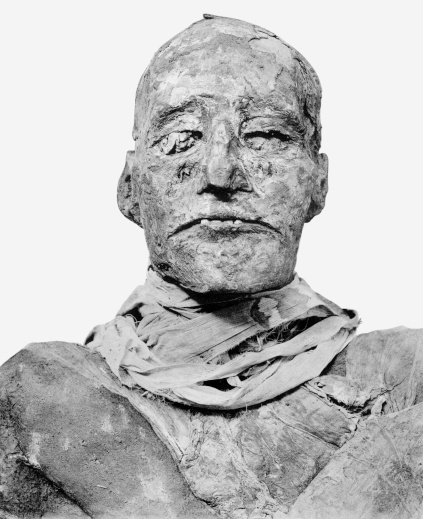 [Above] Ramses III, who once lay in the sarcophagus Belzoni recovered in 1817. This mummy too wound up in the Deir el-Bahari cache. This haunting visage is one of the many macabre faces ancient Egypt has shown to the modern world. 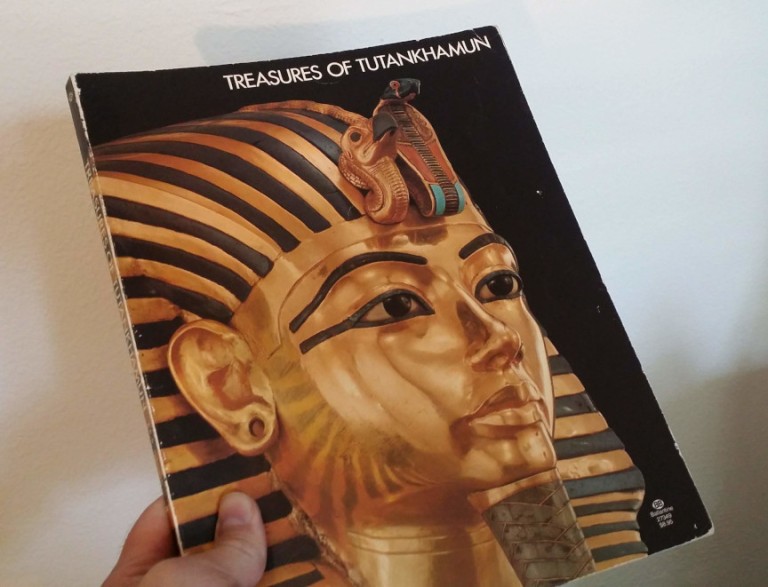 [Above] My copy of Tutankhamen by Christiane Desroches-Noblecourt, published in 1965. Now extremely outdated, the terrible shape this book is in attests to how much I loved and devoured it in my formative years. I’ve owned this book for at least three decades.

All images in the public domain except the two indicated from Seti’s tomb, and the two photos taken by me.