After being sold out by the great European powers, especially Great Britain, as a sop to Sweden, the people of Norway felt angry and betrayed. The Norwegian nobility had united behind Danish Crown Prince Christian Frederick, who had promised to lead them to independence—but Christian Frederick’s revolution increasingly looked like a long shot, particularly in the face of resistance by Sweden’s regent, former Napoleonic general Jean Bernadotte. Nevertheless, Christian Frederick and his allies forged ahead, hoping to forge a new vision of the Norwegian nation and its sovereignty, even if full independence couldn’t be obtained. The result was Sweden’s last war and one of the most complicated political deals of the Napoleonic era.

In this, the concluding part of a two-part series, Dr. Sean Munger continues the story of Norway’s tumultuous founding in the final months of Napoleon and how the political and constitutional ideas surrounding the independence movement came to have a legacy that lasted well into the 20th century. In this episode you’ll meet the conservative politician who thought Christian Frederick was moving too fast, his opposite number who thought it was going too slowly, a British diplomat who was taken with the idea of Norwegian independence, and you’ll encounter the complicated legacy of Jean Bernadotte—also known as Karl Johan—who is maybe the villain of the story, but maybe not. You’ll also take a brief stroll down Norway’s main drag in modern times, join dinner table conversation about Norway’s experience in World War II, and track the battles in the forts and fjords of the Scandinavian north. This is one of the more complex stories told on Second Decade. 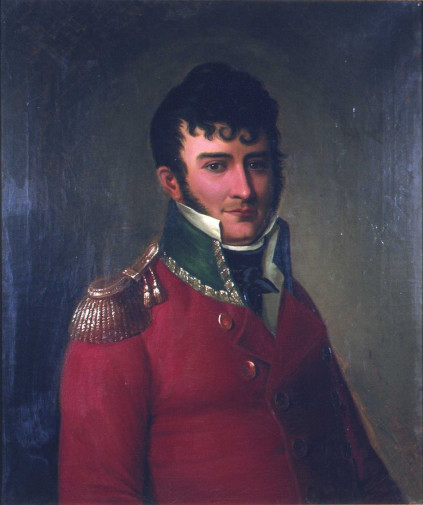 [Above] Christian Magnus Falsen, one of the fathers of Norway’s 1814 constitution. A noted lawyer and circuit judge, Falsen was deeply influenced by Thomas Jefferson and other American revolutionaries. Many of their ideas made their way into the 1814 constitution. He was later appointed to Norway’s supreme court. Painting by Christian Olsen.

[Above] Georg Sverdrup was another important father of the Norwegian constitution. In addition to his political career, serving in the Storting (Norwegian parliament) from 1818 to 1824, he was a scholar and was instrumental in stocking the library of what eventually became the University of Oslo. He gave the speech quoted at the beginning of Part I of this series. He died in Christiania (Oslo) in 1850. Painting by David Arnesen.

[Above] The Battle of Lier on August 2, 1814 was the first major engagement of the brief Swedish-Norwegian War, fought for Norwegian independence. This was the second battle that occurred here; a previous one happened in 1808 (and is the one pictured). The Norwegian war for independence did not reach the scale of the American Revolutionary War, and presented a totally different set of strategic challenges for the nation trying to break away. Norway won this battle, but could not convert on the victory. Art by Andreas Bloch. 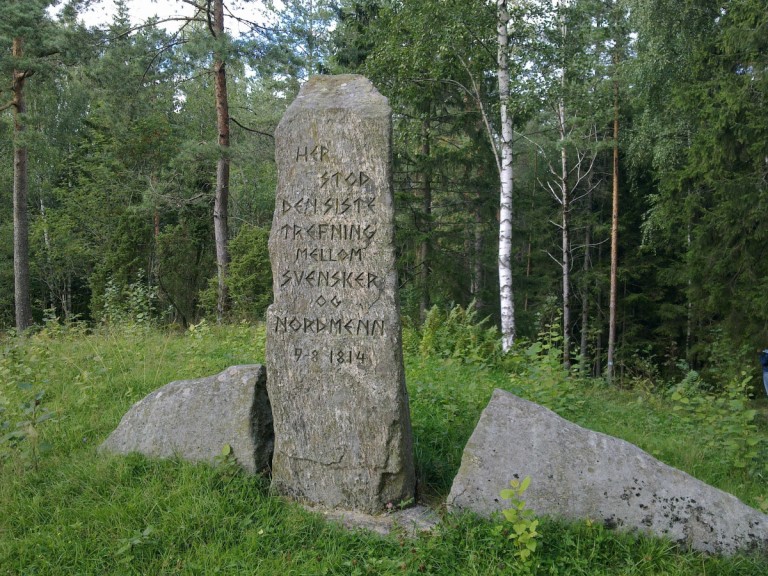 [Above] This stone marker notes where Norwegian units were placed at the Battle of Langnes on August 9, 1814. The battle, though inconclusive, at least gave the Norwegians enough leverage that they could negotiate with the Swedes instead of having to surrender completely. Though the losses were light in all the battles of the Norwegian war of independence–at least by the standards of other 19th century battles–the war deeply marked Norwegian national identity. Photo by Wikimedia Commons user Otebig, Creative Commons 3.0 license.

[Above] Swedish naval forces besieged the Norwegian fort of Frederikstad on August 4, 1814. A total of 207 Norwegians surrendered after a short bombardment. This was one of the battles that convinced Norwegian leaders they couldn’t win a protracted war against Sweden, but further resistance did strengthen the Norwegians’ leverage at the negotiating table. 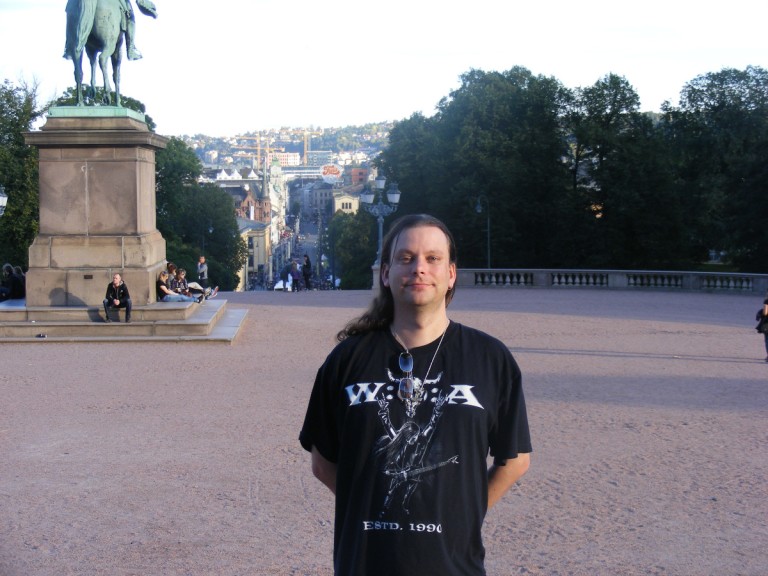 [Above] Sean Munger on Karl Johans Gate, the main street in Norway named for Jean Bernadotte, 2009.

[Above] Plaques commemorating the anchor of the Nazi ship Blücher, sunk by the Norwegian resistance on the first day of the German invasion of Norway, April 9, 1940.

[Above] The peace memorial and eternal flame on the Oslo waterfront. 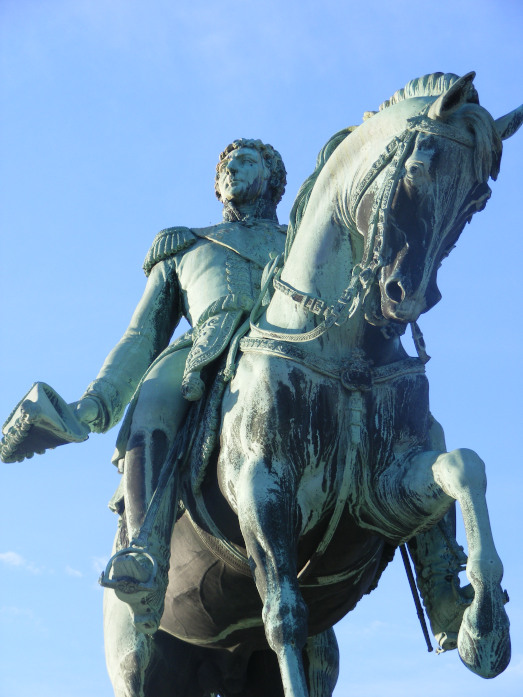 [Above] The equestrian statute of Jean Bernadotte (Karl XIV Johan) in front of the Norwegian royal palace. 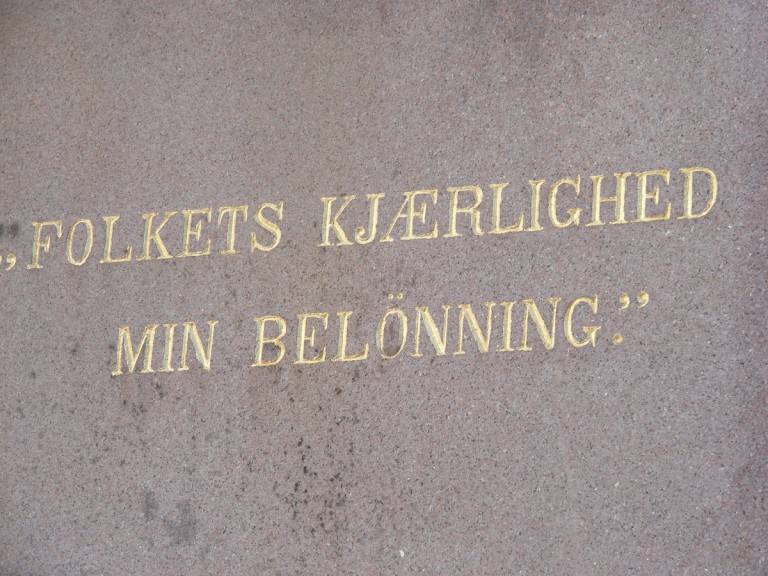 [Above] The inscription on the statue. “The love of the people is my reward.”

All images are in the public domain, except as indicated, and also the Norway images were taken by Sean Munger, all rights reserved.